Who needs bunnies and ducks when you can make your own fabulous purple llama for Spring?! Inspiration for this large but delicate creature came from a friend's quilt in the making, intended for a young relative. I think an actual woven animal is a perfect accompaniment. 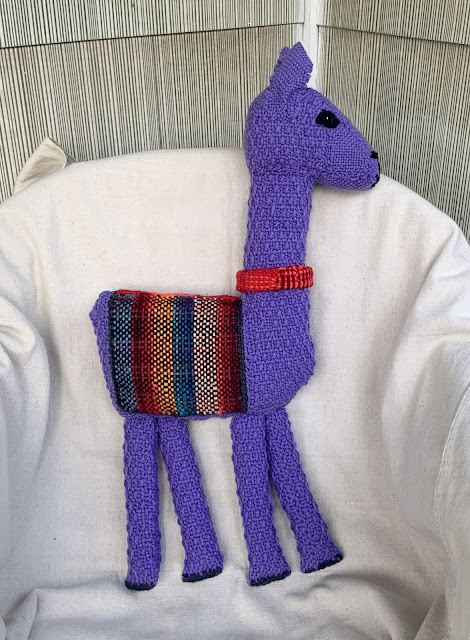 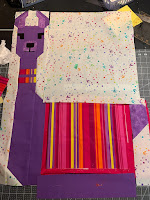 This Spring Llama was made from Red Heart Super Saver Yarn. I had most of a large skein and ended up using every bit of it. This is the first time I have worked on a stuffed animal in a larger size-- part of my interest in making the Llama was to try out a 4" x 8" loom that I had unearthed in my (very messy) hobby room. Keep in mind that you can make all the same pieces by joining two 4" x 4" squares. You can see details about the design and construction below.

Because this was designed as a rather large piece, I wanted to weave it as quickly as possible and I also wanted to weave in a pattern to indicate fur. I chose pattern #4 from the old Loomette Weaves handbook that worked out beautifully.
This is an overall pattern that is very easy to weave and, since you are skipping over or under a number of threads, makes the weaving go much faster.
Here are the basic dimensions and woven parts of the of this Spring Llama.  Keep in mind that you do not have to have each of the looms that I used to make it, it is easy to join 4" squares or 2" squares to make any of the parts. 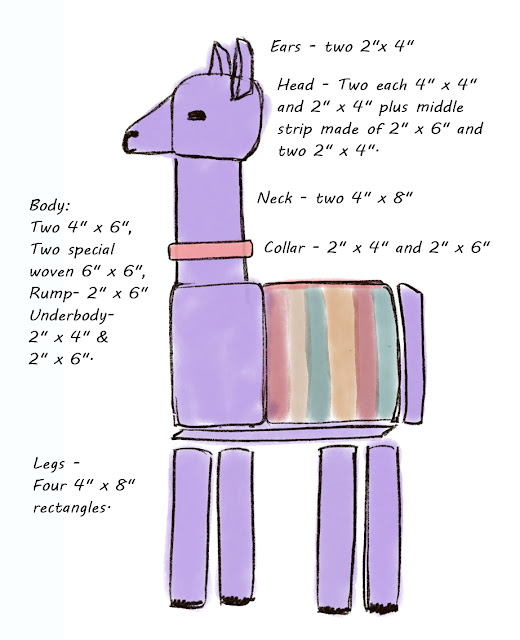 I just noticed that I didn't indicate on the pattern that the bottom front of the body should be folded in a little-- check out the picture of the actual llama above. I think that makes it more llama-like.
Here is a pattern for the head. The most challenging part of the pattern was figuring out how to make the llama nose. I did it by using a 2" x 4" rectangle, turning some of it to the inside. 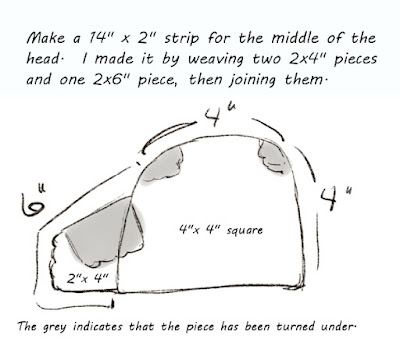 The original quilt pattern showed the llama with a colorful blanket on its back, which I definitely wanted to reproduce. I used a 6" x 6" pin loom and wound it in the two layer fashion, in other words, I just wound the warp on the loom and then used a number of different colored yarns for the weft.
Weaving in this manner definitely takes longer than my normal pin loom weaving, but worked really nicely. I finished the two woven blankets with a single crochet in variegated red along the top edge and a single crochet in charcoal along the other three sides. I was hoping that the charcoal edge would make it look like a shadow, that the blanket was on top of the llama and I think it worked pretty well.
The feet are also finished with a single crochet edge charcoal. I wove the eyes on my 1" pin loom, they could also have been done in a satin stitch.  The nose and eyes are done in black. I added a stitch of white yarn to each eye.
The ears were each made using one 2" x 4" rectangle, stitched together at the top and stitched to the sides of the head.  You may have noticed that there is no tail on this particular llama. The reason for that is that I entirely ran out of the purple yarn and any other color would have been too jarring. 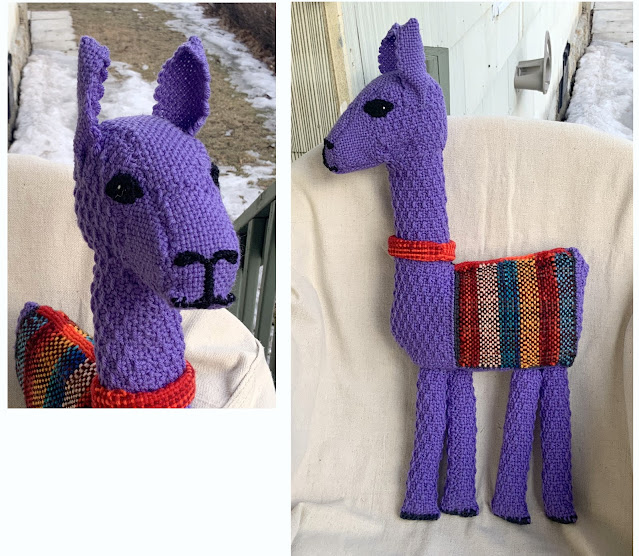 After constructing the llama I decided to add a collar. I used the same variegated red yarn as on the blanket and made a 2" x 10" strip. I turned in both edges and stitched them together to create a 1" x 10" collar, which just fit around the neck without looking too tight.
Spring is with us and with Spring comes rabbits and duckies and, of course, purple llamas. Happy Weaving!
Posted by Margaret Stump at 2:18 PM