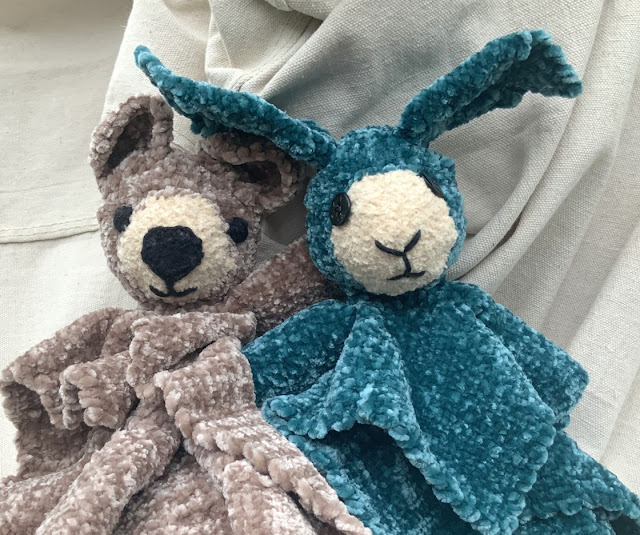 So here is another post about something that I was pretty darn certain that I couldn't do. Shortly before the "sheltering at home" began, I was roaming wildly through Joanne's looking for interesting yarn. I grabbed up one of those enormous skeins of Bernat's Velvet yarn because it was so soft and lovely that I could not resist it--assuming that I would be using it on my rug loom or potholder loom.

I decided to try it on a regular 4" pin loom with no expectation that I could manage it and something wonderful happened. This lush beautiful yarn squashed easily to create a thick, perfect velvet square.


This is not a yarn that I would suggest for first-timers because it is very difficult to see where you are weaving. But if you have woven on a pin loom for a while and know the feel of the weaving pattern, you will find that the yarn's thin core gives the needle very clear feedback so that you can weave with some ease. I found that I had to hold the loom up to a light to make sure of where to start some of the lines, but that the lines were much easier to weave than expected.

One weaving note: I habitually use a fork to tamp down each line before weaving the next and that becomes even more important when weaving with such a thick yarn. But unlike most bulky yarns, this velvet yarn stays tamped down to produce this amazing velvet cloth. 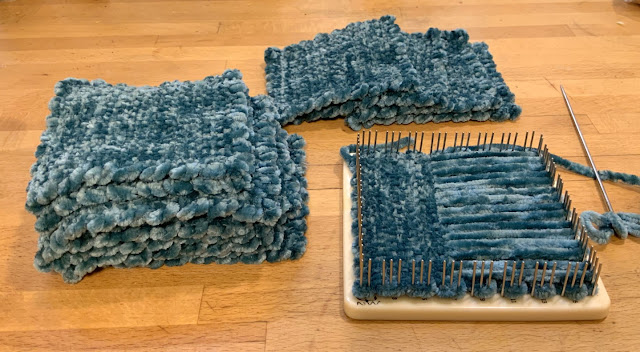 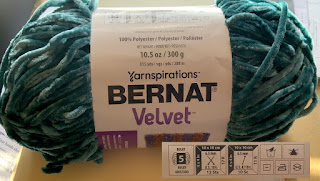 Once I found that I could make these soft velvet squares, I decided to turn them into cozy velveteen loveys. A lovey is a small blanket, often with an animal head, that serves the same purpose as a teddy bear or other comfort object for a baby or small child.

Each lovey is made using sixteen 4"x 4" squares to make a little blanket with the animal head attached on the diagonal to one corner. I used a double overcast stitch to make as seamless a look as I could. The arms and head are made with 4" squares, the rabbit's ears are 4" squares and the bear's ears are 2" squares. I used a square of cream colored cotton chenille to make the animal muzzles.

The bear's eyes and nose were cut from a 2" x 2" black wool square that I first felted. After cutting out the pieces I stitched around and over them with more black yarn. The rabbit's eyes are small buttons which I would NOT recommend if a lovey is going to a baby or child under three. 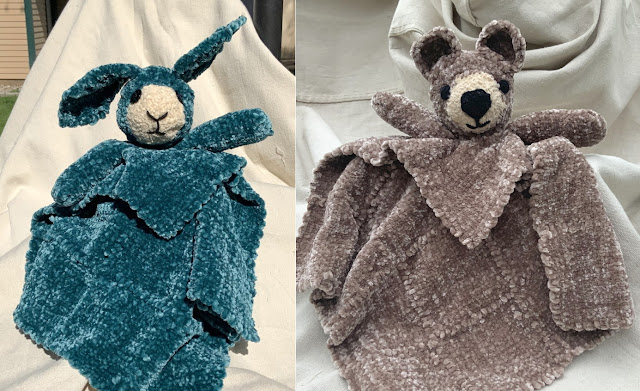 These squares have been so much fun to produce that I can see more and bigger projects down the line-- like an Amish or Navaho inspired lap blanket made with this velvet surface. I can think of a number of people in my life who would appreciate it and its going to be so much fun to make!
Posted by Margaret Stump at 2:05 PM 5 comments:

A Pin Loom Scarf with woven tape and a unique join

A Mother's Day pin loom scarf for all seasons with a rich woven texture and woven tape ties to lighten the look and feel. 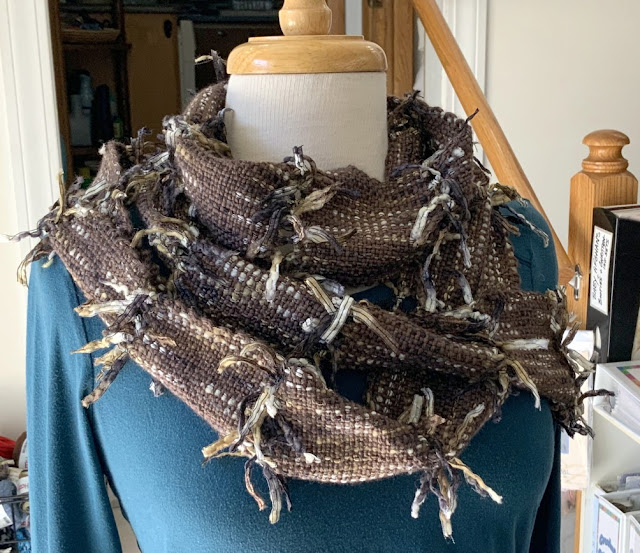 After completing the tape woven place mats and experimenting with another combination of tape and yarn, I decided to keep weaving these lovely squares, 25 in all, and turn them into a scarf. 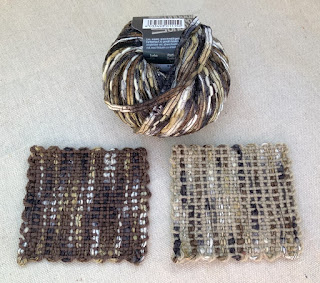 The squares turned out to be of a medium weight and I did not want to add what could be a stiff, tight join between them.  I spaced out the join by using a 10 mm knitting needle, looping the join around it. Deciding that I wanted something still more frivolous, I then added ties to the joins, bundling the joins into groups of two or three and simply tying them with short lengths of the tape.

Because of its length (113 inches) I decided to close the loop and create an endless scarf. That keeps it from dragging on the ground and makes it easier to loop around neck and shoulders.
The top image shows a section of loops before tying them with the tape. 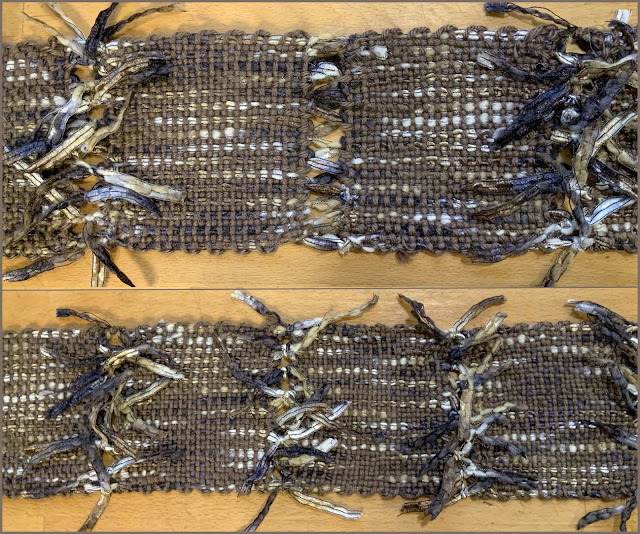 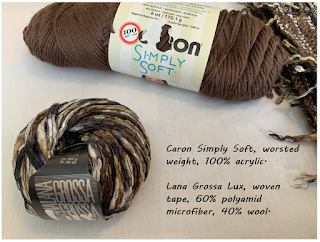 I am constantly amazed by the variety of ways that you can weave on a pin loom. While I have really enjoyed being able to weave consistent squares using a single source of yarn, there are amazing riches to be found in experimenting with a variety of fibers.