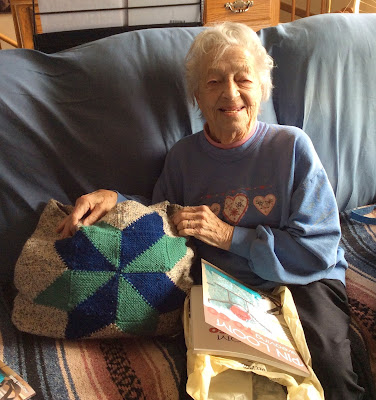 I was lucky enough to catch up with Marilyn Wing, a master pin loom weaver who has been practicing the craft since about 1936.

Marilyn is responsible for the extremely clear, lucid directions on bias weaving on the 4" pin loom and was kind enough to allow me to put the project plans for her bag in the new book, Pin Loom Weaving To Go. So I had to catch a picture of her with bag and book on hand.

Marilyn was also kind enough to let me share a glimpse her latest creations, scarves spun out of raw, dyed silk, woven on the pin loom. That "raw, dyed silk" description might sound clunky-- it goes to show how little I know about what she is doing. But I got to see the silk cocoons that she begins with, 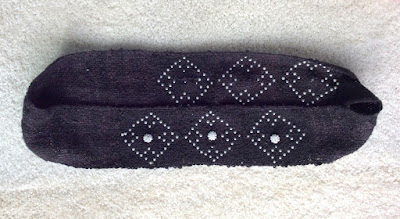 then carefully unrolling/pulling apart a fiber that is so light that you can barely feel it. She spins it into a yarn and dyes it, using the pin loom to produce the exquisitely light, airy, soft scarves you see here.

The sample on the right was woven in a traditional horizontal/vertical weave with pearls woven into the weave. I do wish that I could somehow translate into these pictures the extraordinary gossamer feel of these scarves.

The mobius type scarf below was woven using the continuous bias method with two rows of squares. One of the several aspects that blows me away is that after dying the silk yarn in multiple colors (!) she wove each square to exactly match the others so that the colors of warp and weft flow from one square to the next.  It is just lovely.

For all those who have considered bias weaving on a pin loom but was not sure where to start, I would encourage you to check out Marilyn's directions for bias squares and triangles in Pin Loom Weaving To Go. She makes it so easy to do. 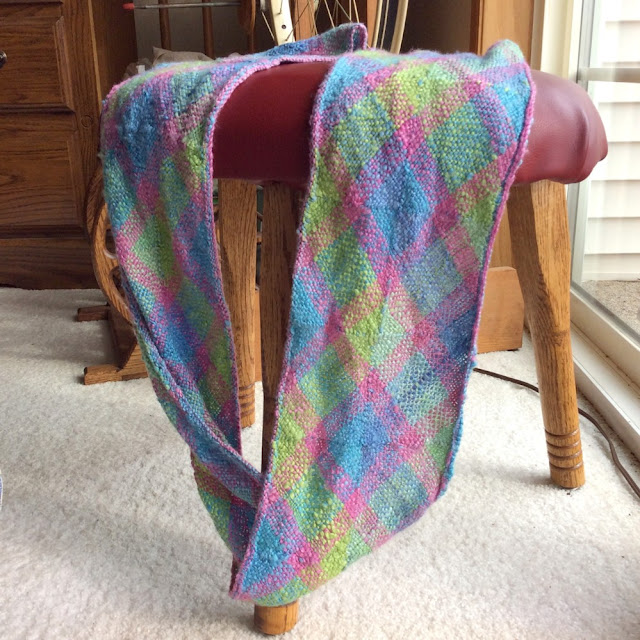 Posted by Margaret Stump at 9:53 AM