I was going to call this "Pin Loom Angels for the Holidays" but angels are good for any time of the year. 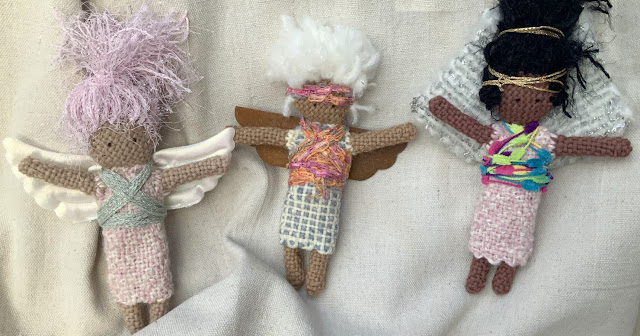 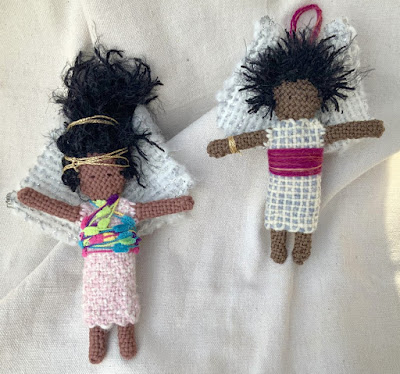 Four inch pin loom squares make surprisingly good wings and my plan was to make some angels with sparkly wings by adding sparkly material woven into the squares. The two angels on the left have silver zigzag laid into the first layer finished off with soft, white yarn for a sparkly, fluffy look.
However making angels is a little like eating chips for me, and I have found that there are lots of angel wings on the market that compliment a pin loom angel. So there is also an angel with rusty, tin wings and one with some sort of sparkly, plastic wings.

Here is the short form for directions to make the angel, there are more extensive directions for making people in two of my books- Pin Loom Weaving and Adorable Beasts. 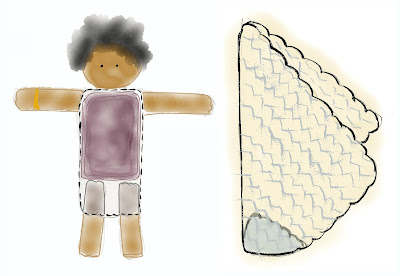 The head is made by stitching a circle on two of the 2" squares, leaving a corner open and turning, and then stuffing. Stitch the head into one end of the gown. Stuff the body with a few layers of quilt batting or other cloth. I used several layers of fleece as stuffing for the body to make these angels. 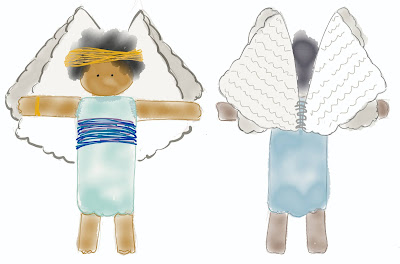 Make the arms and legs by rolling the two inch squares and stitching along one side. Attach the arms to the outside of the gown securing with the same color as the gown. Attach the legs by stitching to the bottom of the gown.  Weave two wings using any combination of sparkly and fluffy yarns that you want. Keep in mind that you can wind any difficult to weave yarn on the loom first and then weave through with a smaller, more supple yarn. Tuck in one corner and fold on the diagonal. I choose not to make a perfect triangle because I wanted the two corners to stick out from one another so that each angel is flying with double wings. Stitch the wings to the angel's back as shown in the illustration.
I used a variety of feathery yarns for angel's hair. The hair was added using a small crochet hook, looping a 4 to 6" length of yarn under the scalp and pulling a loop through and making a larks head knot. The final step is adding a little more glittery or colorful yarn for halos and other embellishment.

One of the fun aspects of making pin loom people or pin loom angels is that yarn comes in lots of colors, just as people, and angels, do. I used wool and acrylic worsted weight yarn for all aspects of the angel body and gown except the hair, which was a lighter, feathery scarf yarn. 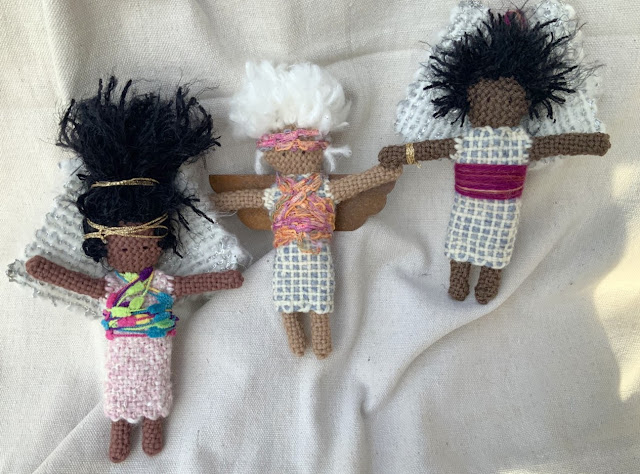 These particular angels are going to be visiting several different family Christmas trees, sending love and comfort in a year when I can not take the message in person. But then, that has always been the purpose of angels.
Posted by Margaret Stump at 3:47 PM