I don’t know how much overlap there is between pin loom weavers and Dr. Who fans, but I am a major weaver/Dr. Who overlapper.

For those who might not remember (or not have been born at that time) Tom Baker portrayed the Fourth Doctor Who from June, 1974 until March, 1981, which was the longest appearance of any one actor in the role of Dr. Who.

One of his most recognizable features was a very, very long scarf. 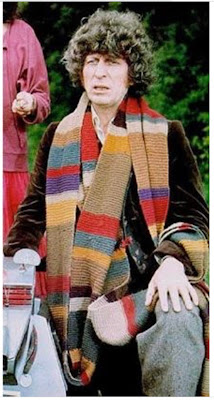 The Dr. Who Scarf website was extremely helpful by giving specific colors needed as well as a layout for the design. The original scarf was 10” by 13 foot with fringe -- which stretched to about 17 foot over the years. My recreation turned out to be 11 foot, 6 inches without fringe. I’m pretty short and decided that fringed scarf ends would end up acting too much like a dust mop.

I decided to limit my yarn choice for the project to what I had available in the house (which is not a ridiculous limit since I’ve got about two rooms full of yarn-much of which has come to me second-hand through various thrift stores). I found a very close match to all but one color in worsted weight wool. I had to use an acrylic yarn for the chestnut color.

When I started weaving and putting the stripes together I was blown away by how the color palette reeked of the 70’s. It dawned on me that my color choices may have been helped by the fact that some of the yarn I was using could have been spun in the 70’s. I may have been using the original colors!

This scarf project turned out to be the perfect choice for several weeks of travel. Since I had a clear diagram, with my modifications, from the irreplaceable Dr. Who Scarf website, I could pick up and do a few squares whenever I needed something to do with my hands. Because I was weaving in different sizes and colors, it was never boring and the project took shape surprisingly swiftly.

It was only after I finished the scarf that I did some further investigation and found that there are a number of people actively knitting, and selling, Dr. Who scarves. However, none of them are woven on pin looms, which I still consider the absolute best, and most fun, fiber technique.
Posted by Margaret Stump at 5:18 PM