New Pin Loom Weaving book is on the way

When I finished writing Pin Loom Weaving; 40 Projects for Tiny Hand Looms, I turned to my husband and friends and said, "That's it, never again." After all, I had just written down pretty much everything I knew about pin looms and I found out that writing a book is more difficult and way less fun than weaving. 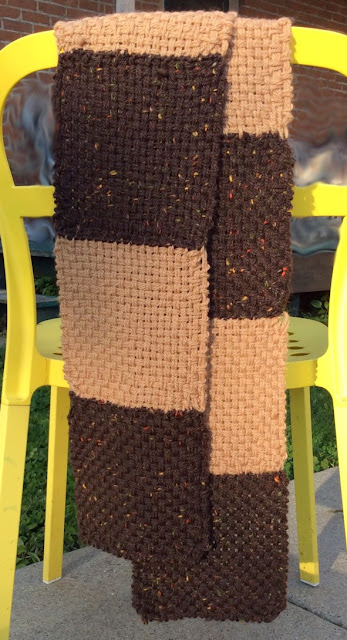 Two things happened shortly after I made that statement,
1) I had a bunch of ideas about how to make pin loom animals and
2) I began to think about a cool new ways to weave. So for the past year I have been working on two plans. Regarding the animal patterns, you should soon be seeing more pin loom animal patterns online- starting with the free rabbit pattern.  And I have been writing a book with lots of new pin loom patterns using a variety of approaches to pin loom weaving. FYI, it turns out that writing a book the second time is just as difficult and frustrating as the first time.

You can be sure that I will proudly let everyone know when the new pin loom weaving book date gets closer. Right now it looks like it will be available in March, 2017. In the meantime I wanted to give you a look at some of the ideas that have gone into the book.

I have always wondered if it wouldn't be possible to pin loom weave on a potholder loom, considering that the potholder loom also has pins all the way around. But I was never happy with having to use loops and finish it off with a crochet type edge. So there are a series of patterns in the new book that are woven, with a finished selvage, on a potholder loom.

The effect is more open and loose than using a 4" loom like the Zoom Loom. The potholder loom works very nicely for scarves and shawls. It also makes it possible to weave large pin loom squares with much heavier yarns. The scarf below is woven from Isaac Mizrahi super bulky yarn, which makes it a colorful choice for Minnesota winter wear. 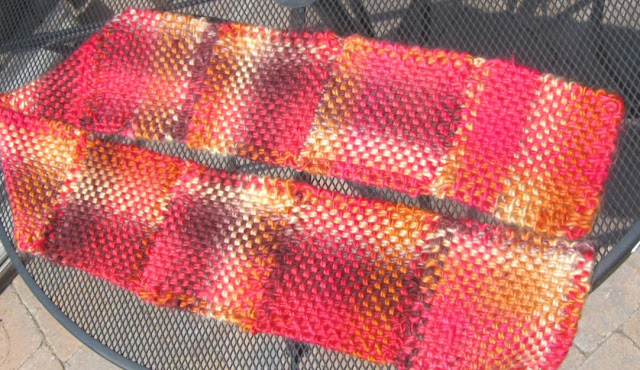 So keep an eye out for more animal patterns, its taking a while but they will be available soon, and I will be posting more information on the new pin loom weaving book as the publication date gets closer.
Posted by Margaret Stump at 2:50 PM