Okay, here's the problem. For a long time I have been under the impression that there is something very special, very distinctive about the three-pin configuration as exemplified by Weave-its, Weavettes and Zoom Looms. I thought that it allowed a style of weaving that was not available without that three-pin configuration.

My question is, does it make a difference if the pins are grouped in threes or not?

I decided on an experiment, take a loom with the three-pin configuration and one without, wind them and weave them up, take some pictures as I go along, see what difference it makes. I chose to use a bakelite Weave-it, the grandmother of three-pin configured looms, and a Loomette, another vintage loom with an even pin configuration. The Loomette looks bigger here because it has a wider frames, the pins seem to be within mm's of one another.

I realize I may be belaboring a very simple idea, I would assume that a good many readers are saying, "Duh, Meg, everybody knows that it works the same."  But I wanted to see how/why it makes a difference.

So, as you can see above, the first layer is wound on.  What struck me immediately was that I can wind the three-pin very fast because the pattern is easy to pick out. With the Loomette I had to stop and count more carefully, using the formula, "go around two, leave one pin open." 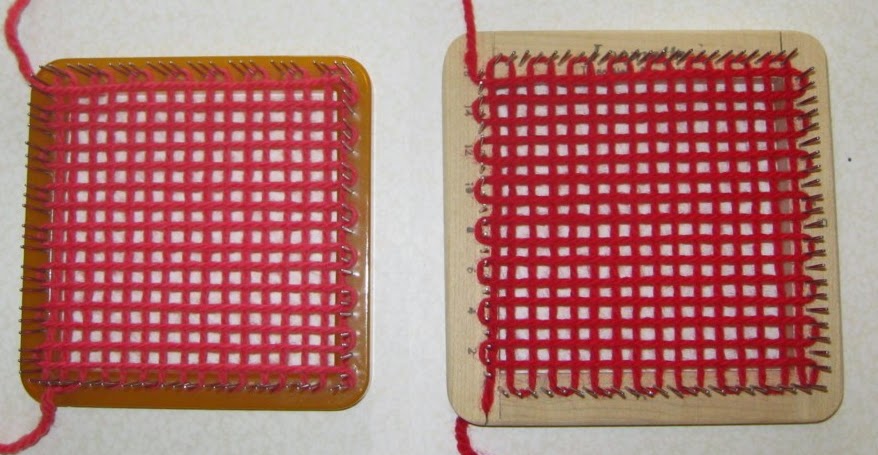 Here's two layers on and I'm a little surprised to find that they look just alike, the grid is just as even with the three-pin as with the open configuration.

Weaving in that last layer works just the same, however considering that the Loomette has slightly more space between the pins, it may offer slightly greater ease in the weaving process.

And here they are. The product is the same size, the sett is the same, the corners are all the same. The only difference is that the three-pin set up is quicker and easier to wind because of the visual cues of the different pin clusters.

If this is true for these looms, then it must be true for bias weaving as well. I have read the advice that any pin loom can be used as a bias loom, but I couldn't get beyond the "problem" of the three-pin clusters. I am going to have to practice bias weave a lot more with the idea in mind that the exact amount of space between the pins, clustered or not clustered, makes no difference... and then come back with pictures!
Posted by Margaret Stump at 3:47 PM